I Catered a Wedding 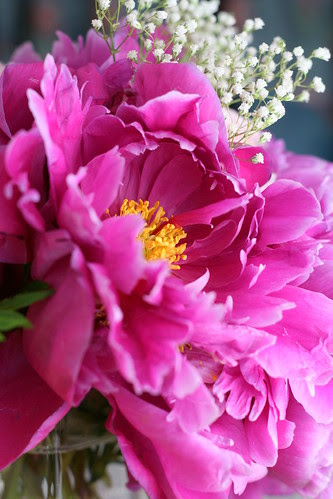 It’s Wednesday now right? A week of studying, 2 finals, 3 days of food prep, a wedding, and 3 days of downtime including much needed sleep brings me to where I am now. I think I’ve finally recovered enough to form coherent thoughts again. A week ago today, I finished my last exam of the quarter and with that, officially finished my first year of medical school! That thought hasn't completely sunk in yet because right after the exam, I started on the wedding food.

Wednesday:
I tried to make a schedule for the next two days and time points for when food should be chopped, cooked, or baked. I knew it wouldn’t be followed but I had to at least try to delude myself into thinking there was going to be some sort of organization.

Thursday:
E. and I hit up Costco, the local veggie stand, Trader Joes, and 2 local grocery stores for all the food. That night, I made seedless blackberry puree for the salad dressing, 6 dozen gougeres, and the Marsala cream sauce.

Friday:
The majority of Friday was devoted to wedding cupcakes, which deserve their own post.

S. came over to help me with the lasagnas. She also had the very important job of helping me keep it together in case I had a complete meltdown. Luckily, no meltdown. And even better, we successfully put together 2 enormous spinach and artichoke lasagnas. 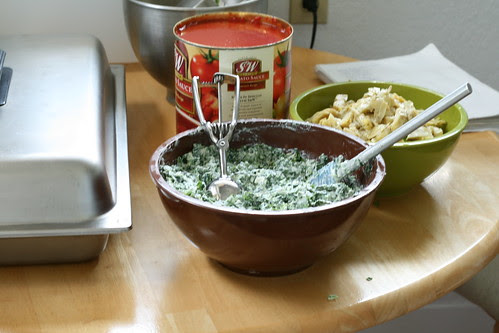 quadruple the ingredients of a 9 x 13 lasagna

Saturday:
AM: Steven and I packed every appliance, gadget, and cooking tool I could possibly need in the trunk. We had to turn around a few times because I nearly forgot a cookie sheet and my camera. The majority of the prep had to be done before the ceremony but luckily I had 3 awesome helpers, S., D., and Steven. In the 2 hours before the ceremony we had to make the orzo salad, blackberry vinaigrette, balsamic vinaigrette, cucumber sandwiches, and prep 5 pounds of vegetables.

We tackled the orzo salad first. A pound of orzo is deceptively small so I mistakenly thought I could cook 3 pounds of it in only 5 quarts of water. Big mistake. After a few minutes, the orzo sucked up all of the water and the contents of the pot turned into a starchy, bubbly, molten pot of deadly pasta lava. There was definitely a struggle in the great Orzo Battle of 2009, but our heroic Steven successfully managed to get all of the orzo strained, rinsed, and drained, without sustaining any 2nd degree burns. And he did it all using only this tiny sieve

Meanwhile, I worked on the blackberry vinaigrette. I was following my own recipe but it just didn’t taste right. The blackberry puree I made on Thursday was too tart and I didn’t pack any sugar because none of my recipes called for it. Then I had the brilliant idea of...

diluting it with 7-Up!

First, the debacle with the orzo, then, who would have expected that high fructose corn syrup would be the secret ingredient.

Thank goodness there were no other major problems, otherwise my mental health would have been highly questionable. I won't bore you guys with the details of chopping 6 cucumbers, salt, pepper, and flouring 6 pounds of chicken breast, or how we expertly reheated the gougeres to piping hot perfection.

After the prep, I was able to sneak upstairs and take a few pictures. E. was hands down the most ethereal and angelic bride ever. If anyone disagrees with me I will first politely show you picture proof, and then if there is still disagreement, I will take you down. ;) Everything about the ceremony, the decorations, the music, the vows, flawlessly captured the beauty and essence of the couple, as individuals and together as husband and wife. All I can say is it’s hard to hold a camera still while crying. I’m just glad I wore waterproof mascara. 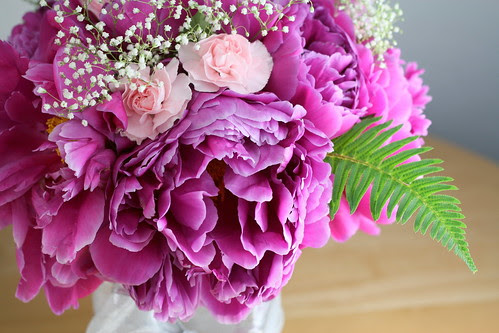 E.'s mom grew all of the flowers, made all of the arrangements, and decorated the venue

With timing being my main concern, my biggest accomplishment of the day was getting all of the food done at the same time so everything was hot and served at peak deliciousness. I had been bracing myself for something catastrophic for the last 2 days, but thankfully there were no disasters in the kitchen. Long story short, no burns, cuts, lost digits, food poisoning, and not a single stain on wedding clothes.

Oh and I seared 6 pounds of chicken in a satin dress and heels. Hell yeah!

Everything came out the way I was hoping it would and exceeded all of my expectations. I can now say that I’ve catered for 50 people. I’ve thought about starting a catering business on the side in the future, keyword being future. Now I know it’s definitely not something I would want to tackle again without enough counterspace, a second fridge, and a dishwasher in our kitchen. Washing everything by hand in a tiny sink is not an experience I would like to repeat. But in the end, it was a great feeling seeing everyone happy, wellfed, and having a good time. Whew!

D. for being my prep bitch on Saturday and doing all of the grunt work--peeling fava beans, chopping snow peas, bell peppers. etc. I am so grateful. And you did the dishes afterwards. I don’t know how to properly say that you are really kickass.

S. for helping me with lasagnas on Friday and letting those lasagnas hijack your fridge space.

Steven for being the glue that held everything together on Saturday. You know how I work in the kitchen and I couldn’t have done this without you.

Oh my goodness! How fantastic is this. Your rock! Can't wait to see the pictures! Congrats for pulling this off and without even staining your satin dress ;).

Ha! There we go, now I can comment :) I'm so incredibly impressed - I will just have to do the cake, and it's not for a year, and I'm still freaking out! And cooking it all in heels? You 50s housewife you :)

This is amazing! Congratulations! Out of curiosity, how many people did you feed?

Amy wow! I don't think I'll be able to do it. You are fantastic for sure. WOW!

Congratulations! Two big accomplishments in one week is pretty major. I am catering a wedding for 50 in August (in Bremerton) and may hit you up for advice!

I just want to say that I've been looking for a blog like this one for ages. All the recipes are so well written and with PRECISE measurements; it's so amazing. I'm a pre-med college student just learning how to bake (forget cooking for now), and this whole thing is like a godsend to me. Thanks so much!

Veron,
I'm told there are some pics of me doing this. Still waiting on those. :)

Engineer baker,
I can't wait to see what you make. Make sure to get enough pics of the process. That's something I didn't do.

tamarindandthyme,
It was supposed to be for 40 but we had so many leftovers we could have easily fed 50/60.

Dana,
Of course! Feel free to shoot me an email anytime, hopefully I can share a little wisdom even with my very limited experience.

Juliana,
Thank you so much, that's wonderful to hear! I've been working harder getting more accurate weight measurements in my recipes.

WHAAAAAAAAAAT? Crazy girl! Hey....a med student?! Where the heck do you find the time? Wowsa...you are driven!