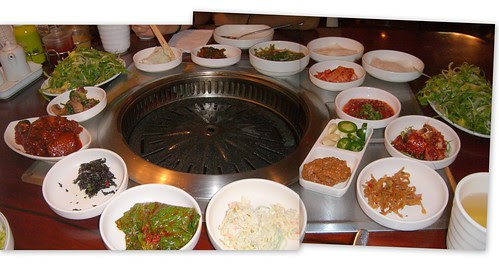 Steven and I went on a short, laid back trip down to LA two weekends ago where we didn't do much but eat, our kind of vacation. It's ridiculous how much good food there is down in SoCal.

First stop: xiao long bao. I’d been dying for a fix since my last Vancouver, BC trip. Steven and I were debating if we should visit Din Tai Fung since they’re world renowned and we’d be within 10 minutes of the only North American branch. After asking both Steven’s sister who’s eaten there and Wandering Chopsticks, we heard that the wait is too long, the dumplings are tiny and overpriced so we decided it wasn’t worth it. We love our soup dumplings but we’re also poor students.

Instead, we visited both Mei Long Village and JJ's based on Wandering Chopsticks’ recommendations. The two restaurants are in the same complex, literally 30 feet away. Maybe we went at an off time, but the pork xiao long bao at Mei Longs barely had any soup. I was pretty bummed. The meat and the soup, albeit very little, was flavorful. The crab dumplings were, however, very mediocre just like WC said. We paid our bill and went to JJ’s, 2 shops away. Their pork dumplings had sooo much more soup. In the end it was a tossup for the pork soup dumplings, Steven preferred the flavor of Mei Long's, I preferred JJ. The crab dumplings at JJ were hands down much better, way more crab flavor and soup. Again just echoing what WC wrote in her original posts about the two dumping houses. The crab dumplings are definitely worthwhile but don’t bother with the sheng jian bao. They’re way too bready and have no soup. For sheng jian bao, WC recommended Kang Kang food court, which we went to later that night for shaved ice but didn’t have enough stomach room left for sheng jian bao.

Later that night, we visited SoCal’s famous Pinkberry. The original flavor is definitely the best. The original with raspberries, almonds, and chocolate made our night. Pass on the green tea froyo, it had barely any matcha flavor and it just didn't taste right. We recently tried some froyo at a place near UW campus and it didn’t come anywhere close to the wonders of Pinkberry. I have a feeling I’m gonna need a fix in the near future.

At around 10pm we met up with WC, who took us to her favorite Hong Kong café, Baccali. Milk tea plus condensed milk with endless refills, Malaysian style roast chicken with curried rice, salted fish and chicken fried rice, deep fried chicken wings, and beef chow fun. It was a diverse array of food but the concept works and tastes even better late at night. Steven and I ate so much, we were in pain for a bit. I think it was the free tea refills that did us in.

We started Day 2 off with lunch at In-n-Out. Animal style cheeseburgers and well done fries. The burgers were delicious and ridiculously cheap! I was expecting the “well-done” fries to be extra crispy but still fluffy on the inside, but these were fried all the way through so they just tasted dry and stale. I’ll skip these next time and just get the regular fries.

For dinner, we drove to Koreatown for Korean BBQ at Chung Kiwa. The seafood pancake was chock-full of delicious seafood but way too pricey at $18. The black angus kalbi and spicy pork (daeji bulgogi) were both very tasty. I liked the rice noodle sheets for wrapping the beef but Steven and I were more used to lettuce leaves. The waitstaff are very attentive and continually checked on us and cooked our food, even though we didn’t understand a word of Korean.

It was a delicious, calorie-filled trip but after 2 days of LA smog, it was good to be back home in Seattle. Thank you to Wandering Chopsticks for being our fearless leader at Baccali and Jen of Use Real Butter for your great restaurant list, I wish we had more time to check out all the fantastic places you recommended.

Now for a short recipe. 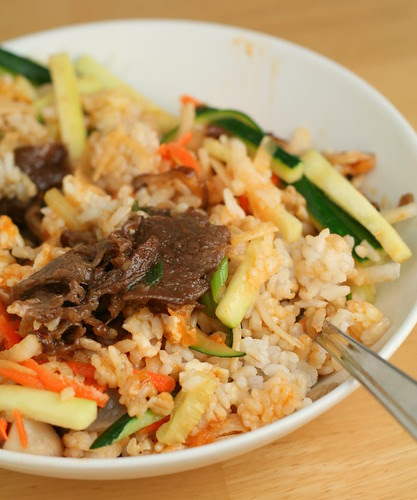 I think the most appropriate recipe to follow this trip report would be the bulgogi bibimbap photos I took over a month ago. My favorite is the dolsot bibimbap, bibimbap served in a big hot stone bowl. The crispy rice crust that forms along the side of the bowl is the best part. I have no idea where to buy those cool bowls and it’s probably too much trouble to mess with at home so I’ll leave that to the pros. Bibimbap literally means mixed rice and stirring it up is definitely the best part and looks even more delicious. 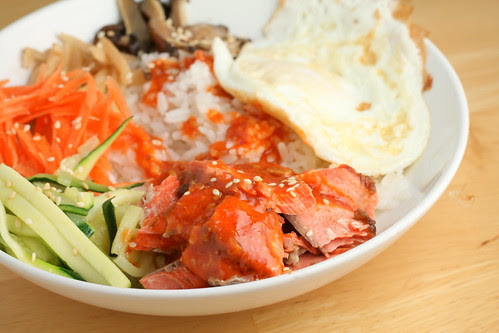 I normally throw bibimbap together and have no coherent recipe. I made it again yesterday and I’ve come to the conclusion that I probably won’t ever write down an exact recipe because it’s more work to get the exact measurements than to just wing it and throw stuff together. Cooked zucchini, grated carrot, leftover meat or tofu, steamed rice, fried egg, and bibimbap sauce are the bare minimal. It only takes me 15 minutes to make a bare bones version because I usually don’t go all out and make fresh bulgogi or marinated bean sprouts. Yesterday I covered a small 8 oz. salmon fillet with some the same marinade I use for kalbi, and roasted it in the toaster oven. Prepare as many of the sides as you like, it would take way too much time to make them all.

I live 5 minutes away from Din Tai Fung, glad you enjoyed the food in my area! SGV has the largest Chinese community in the entire country so we definitely have the best Chinese food :)

It was so great to finally meet you! And thanks for so much link love in this post. I'm glad you got a chance to try so many of my favorite restaurants. Gives you more incentive to come back. ;)

This spread looks sooooo good! My mom, sister, and I used to go eat Korean when I was a teen, I miss those days!

what a great foodie trip! I love Korean food, that black angus kalbi sounds delicious! I've never had bibimap but I luv bulgogi...

I really love how your blog looks! The recipes look good too. I also love the korean food. I saw Iron Chef America battle rice last Sunday and mario made a Korean dish called Bibimbap. It look amazing. your picture med me hungry. I can't wait to make this next week. I am very happy to visit your site. thank you for posting and sharing it.

Thanks
onno david
my site