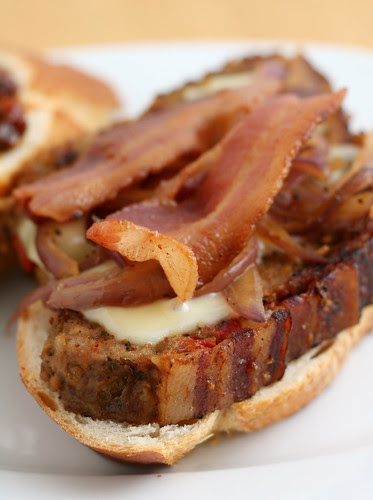 So many recipes end up in the blog post graveyard because I couldn’t remember how I made it. I never write anything down because I always think I’ll remember everything but two weeks later, I'm racking my brains trying to figure out if it was 1 or 2 teaspoons of x, y, and z. I’ve had this meatloaf sandwich photo in my photostream for over two months because I neglected to write down the recipe the last time I made it. I finally got around to making it again and this time I was extra meticulous in measuring and weighing ingredients. Steven volunteered to be the kitchen scribe so this recipe finally made it down on paper. The roasted bell pepper makes it extra special but I understand if you don’t want to go through the trouble. The best part is the crisp bacon wrapping, that’s something you absolutely can’t skip. I will use any excuse to add bacon to something, preferably copious amounts of bacon. This recipe has one loooong ingredients list but it’s so worth it!

The leftovers are just as good, especially in sandwiches. I prefer hot meatloaf sandwiches, I could never get behind cold meatloaf. I cut the meatloaf into thick slices and sear them in a skillet and sauté some mushrooms and onions. Then all of that gets piled on two slices of thick sourdough with shredded pepper jack or white cheddar, ketchup and mustard, and slowly toasted in a skillet with lots of butter until the cheese is melty and bread is golden. Good times.

I also recently started using Twitter because it seems like the cool thing to do. Actually, I registered my username a few weeks ago but never got around to setting it up. Mysteriously, I started getting followers of my empty Twitter, which pressured/prompted me to try to make things more interesting for all 4 followers. :) Anyway, so if you want to hear me tweet about classes, exams, and food aka my life in three words (more like bitch about the first two and go on incessantly about the third) you can follow me at @nookandpantry. I'm still a total noob at this twitter business so bear with me.

Roast the bell pepper on the stovetop or under the broiler, cut the bell pepper so it lays flat on a baking tray and broil on the top rack until the skin blisters and blackens. Let it sit until it is cool enough to handle before peeling off the skin then dice the roasted pepper. Set aside to cool.

Preheat the oven to 375 degrees F. Line a rimmed baking sheet with foil.

Mix all of the ingredients – beef, sausage, cooked vegetables, fillers, and flavorings in a large bowl. Turn the meat mixture onto the prepared baking sheet and shape it into a loaf form. Wrap the loaf with bacon, tucking the ends under the loaf. Bake at 375 degrees until the internal temperature is 165 degrees and the bacon is crisp, about an hour. Let it rest for 15 minutes before cutting.

Serve with ketchup because you can't have meatloaf without ketchup. 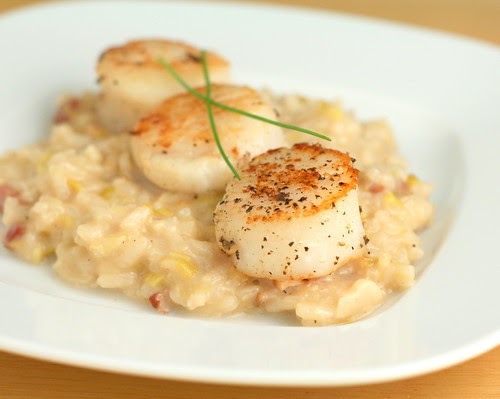 jump to the new blog for more risotto


Leek and Bacon Risotto
*note: omit the bacon for a vegetarian version

In a small saucepan, bring the stock to a low simmer and keep it warm.

In a large heavy bottomed saucepan or Dutch oven, cook the bacon over medium low heat until crisp and the fat has rendered. Turn up the heat to medium and add the leeks and a pinch of salt. Cook until the leeks have softened. Add the rice and cook the rice until the rice is evenly coated in the fat and toasty. You will be able to see an outer opaque ring around a white center on the rice grains.

Add the white wine and cook until it has absorbed. Reduce the heat to medium low and add a half cup of the chicken stock and freshly ground black pepper to taste. At a low simmer, cook the rice, while stirring continuously, until all of the stock has been absorbed. Add another half cup of stock and stir continuously. Repeat adding the stock and stirring continuously until the rice is al dente. You may not need all of the stock, or if you find yourself running low on stock, use some hot water. Start tasting the rice after 20 minutes of cooking. It should be tender with a slight firm bite in the center. When the risotto is finished cooking, take it off heat. It will be creamy, moist, and somewhat runny but it will thicken after adding the cheese and while it cools.

Off heat, stir in the Parmesan and butter and taste for salt. 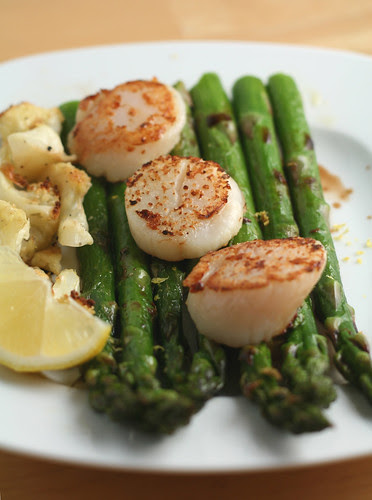 Made these for Valentine's Day. They're perfect on this risotto.

Keep the scallops in between two sheets of paper towels before you cook them. This will help absorb any moisture from the scallops. Season the scallops on both sides with salt and pepper.

Heat a stainless steel or well-seasoned cast iron skillet over medium high heat and add a tablespoon of vegetable or canola oil.

When the pan is hot, add the scallops, giving them about 1 - 2 inches of room in between each other. Cook them undisturbed for 2 minutes then using a spatula, gently flip the scallops to the second side, cook for another 1 minute or until the second side is nicely browned also. Take off heat and serve with your favorite side. 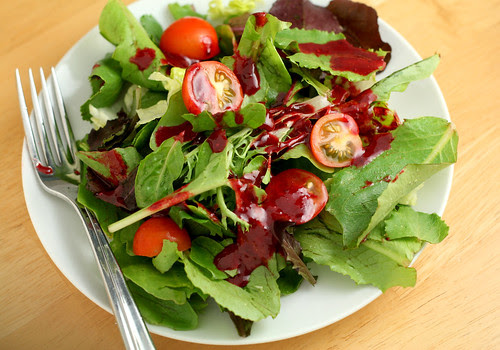 For the salad mix in our CSA box, I made a blackberry vinaigrette with the blackberries I painstakingly picked last summer. I still have about a gallon of frozen blackberries and I better hurry up and use them before they start tasting like freezer. Wouldn't that be a waste! I mean, my sweat and blood went into picking those blackberries! This is a great summery, fruity dressing that really relies on fresh berry flavor.

If your blackberries are very ripe, sweet, and potent, you can get away using just two tablespoons of puree and add some lemon juice for tartness. My blackberries were not picked at their absolute ripest so they were still on the slightly tart side and I didn't need to add any lemon juice at all. Don't add any acid in the the beginning and just taste as you go.

Whisk the blackberry puree and Dijon together to mix, slowly whisk in some extra virgin olive oil until you get the consistency you like. Add lemon juice for additional tartness. Season with some salt and pepper. 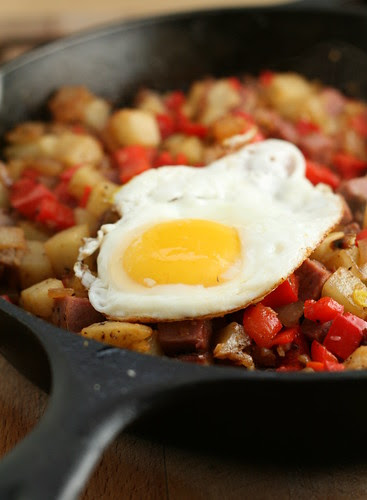 The best part about corned beef is the leftovers but the hardest part is deciding whether to make corned beef hash or Reubens. Steven and I didn't want to choose this year so after making corned beef hash, Steven and I visited some of Seattle's finest Reuben establishments. Project Reuben is currently incomplete so that will be a story for another day.

St. Paddy's day is long over but hopefully some stores are still selling corned beef. All you really need for corned beef hash is corned beef, onions, and potatoes. I added the red bell pepper to make it a little more interesting and it adds a nice color. I would have preferred Yukon Golds but I had some neglected Russets that needed to be used. Since Steven and I are unabashed carnivores, not only do we have to have a high corned beef-to-everything-else ratio, I threw in some bacon for good measure (cuz bacon makes everything better). Oh and don't forget the fried egg!

Cook the bacon in a nonstick or well seasoned cast iron skillet over medium heat until crisp and the fat has rendered.

Add the diced onions and potatoes. Add more oil if not enough rendered from the bacon. Shake the skillet and flip the potatoes occasionally so the potatoes can brown on all sides. Cook until the potatoes are nearly cooked through.

Add the corned beef, bell peppers, mustard, oregano, and any additional seasoning. Cook until the potatoes are fully cooked through.

Serve with a fried egg, ketchup, and Tabasco.