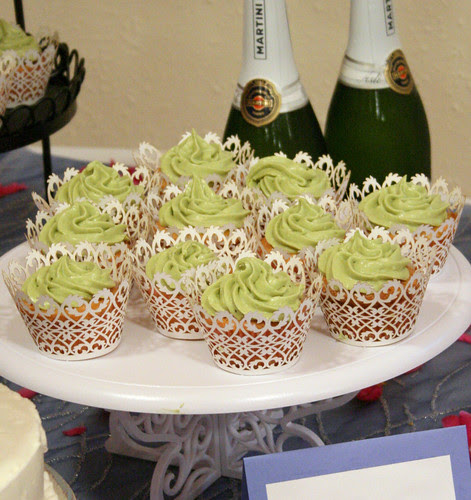 Most of the wedding food was tested repeatedly but none as extensively as the wedding cakes. Even if the food was mediocre, I wanted E.’s cakes to be perfect. In between studying and midterms, I tweaked and adjusted the cake recipes all quarter long. I stopped baking everything else and focused solely on the cake for 2 months. I’ve never spent this long developing and testing a recipe. All that work was worth it because the cupcakes are some of the best things I’ve ever baked.

The Planning
When E. and I first started planning many months ago, we quickly settled on cupcakes instead of a traditional tiered wedding cake. Cupcakes are very trendy right now but we chose them for more practical purposes. A tiered cake would take days to put together and with me doing all of the food, it just wasn’t a feasible option. Cupcakes are also great for quality control. I can taste the cupcakes after baking to make sure it turned out okay and no one will be any the wiser. It would be painfully obvious if a chunk was missing from a large wedding cake.

For variety, we would have both yellow and chocolate flavors. E. loves green tea so that had to be worked in somehow. In addition to frosting the cupcakes would also have a filling, just like a layer cake, because I wanted them to have a little extra something. After all, they're for a wedding!

At first, we planned to make 2 dozen of each flavor but then we upped the number to 3 dozen each in case guests wanted to try both flavors.

Flavor Development & Recipe Testing
I originally planned to make a green tea buttercream but buttercream can be very temperamental. The last thing I wanted was buttercream breaking the night before the wedding, the frosting melting the day of, or hard and dense frosting if the cake was served too chilled. For simplicity sake I went with a cream cheese frosting because it’s easier to make and very stable.

I paired the green tea frosting with the yellow cake and first tried lemon curd as the filling, but in the end, raspberry coulis complemented the tea even better. The yellow, red, and green colors made it the perfect Springtime cupcake. Originally, I planned to make an almond buttermilk cake, but the almond and buttermilk flavors were lost under the raspberry and green tea flavors. I nixed that idea and decided to go with the classic vanilla. Instead of using extract, I used a Tahitian vanilla beans for a rich floral flavor to complement the fruit filling and grassy notes of the matcha. 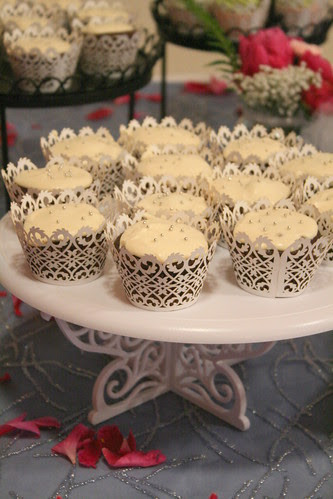 I won't be writing about E.'s chocolate cupcake because I'd like to keep that recipe just for her. Out of all the wedding food, I spent the longest time working on this one.

Baking the Cakes
It was Friday morning, the day before the wedding, and I was still working on the yellow cake. My last attempt making a yellow cake led to my desperate cry for help on this blog. I want to give a really a big thank you for everyone who left suggestions. I told E. about my problems and she told me to just follow a recipe in a cookbook. If I was a sensible person I would have taken her advice and stuck to a recipe. But I've confessed before about how I can never follow a recipe. Less than 24 hours before the wedding, it still holds true, I still can’t follow a recipe. I’m pretty sure I have a problem and I need professional help.

But in my defense, after looking at nearly 2 dozen recipes, none of them fit my specifications. Either they called for too many eggs or cake flour or looked too similar to the recipe I tried already. Call me stubborn or just plain stupid, but I went with my gut and decided to give my crazy experimentation another go.

Instead of creaming the butter and beating in eggs, I decided to go with a sponge cake technique, beating egg whites to soft peaks and beating the egg yolks and whole egg separately to ribbon stage. I also added in some baking powder because I wanted as much leavening as possible for the fluffiest cake using all purpose flour instead of cake flour. As the cakes baked in the oven, I crossed my fingers hoping that this recipe worked, because I was running seriously low on time. When the cakes came out, they looked fine, no gross deformities and no cave-ins. I broke one in half to inspect the crumb and was completely blown away at how they turned out. The cake was airy and fluffy and looked like a cake made with cake flour. It was moist and flavorful, and substantial enough to be a cupcake. I simply couldn't believe I could make a cake like that without cake flour. Not to be tooting my own horn or anything but this cake was perfect.

I baked the chocolate cupcakes in the afternoon and was so worried something disastrous would happen. Nothing had happened yet but something bad was bound to happen right? I'm always very pessimistic when it comes to baking for an important event.

I made the frostings later that night and finally finished filling and frosting the cakes at 12pm. Then I successfully managed to fit 6 dozen cupcakes in 2 very large hotel pans in our tiny fridge and hope the fridge didn't decide to give out overnight. If I had more time and more piping experience I would have decorated the cakes more elaborately but I did the best I could after 10 hours of food prep. I’m really glad I bought this cupcake decorating set

because the 1M tip is essential for making the large frosting swirl.

The cakes were the pièce de résistance and I was immensely proud of them. The texture of the cakes were perfectly moist and fluffy and the flavors were well balanced and harmonious. I wished I snapped more pics of the process but I was totally pooped.

Thank you Veronica for showing me the gorgeous paper cupcake wrappers. The moment I saw those wrappers on your site I immediately forwarded the link to E. and we both fell in love with them. They completed the cupcakes and were the perfect finishing touch!

Preheat the oven to 350 degrees F.

Add the sifted flour, cornstarch, baking powder, and salt into a bowl. Whisk it together to evenly mix the ingredients. In a separate bowl, mix the oil and melted butter.

Separate the eggs and put 2 egg whites into a mixing bowl or the bowl of a stand mixer. Make sure the bowl is very clean and dry because any fat or water in the bowl will interfere with the egg whites whipping properly. With a whisk attachment, whip the whites on medium high until they are foamy. Add the cream of tartar and continue whisking. When the mixture starts gaining volume, slowing add 1/4 C of granulated sugar. Whisk until soft peaks form. If you lift up the whisk attachment and the mixture is still shiny and runny and looks like, keep whipping, you’re almost at the soft peaks stage. Scrape the whites into another clean bowl and set aside.

Add the 3 egg yolks, remaining egg white, 1/2 C of granulated sugar, and scraped vanilla bean seeds to the mixing bowl or stand mixer bowl. Whisk this mixture on medium high until the mixture is thick and pale yellow. Lift up the whisk and the mixture should fall back into the bowl like sheets of ribbon. The trail should be visible on the surface for 3 seconds before disappearing.

Fill the cupcake tin 3/4 of the way full or divide the batter equally between 2 cake pans.

Bake at 350 for 20 – 22 minutes (may need a longer time for cake pans), or until a toothpick inserted into the center of the cake comes out clean and the top springs back when lightly pressed on.

Cool to room temperature before frosting.

I know others were also looking for a good yellow cake recipe. If you try this recipe let me know what you think!

What a great story!

Oh I'm so glad everything fell into place, and those cupcakes are just gorgeous! The liners are stunning as well - wonder if the bride I'm baking for will be willing to pony up for them too...

You did such a great job and everything looked beautiful. My August client wants cupcakes too. Where did you get those liners? Could you email me at danatreat[at]gmail[dot]com? I tried googling a bit but can't find them.

Beautiful cup cakes. Lots of work and looks like it came together just right.

So cool that they turned out great after all your hard work. They look lovely and they sound like they tasted fantastic.

After reading the previous post and this one, I can't believe you had time to do all that. Crazy! Also, pictures? Where are all the pictures of all the food you made?

How could I have not commented on this? These look gorgeous...everthing sounds delicious and those wrappers...well...:)

WC,
I was so busy cooking, I was too tired to take pics afterwards! :(

All looks wonderful, and those are some pretty fancy cupcakes!

I did a wedding a few months back, but my bride wanted plain and simple (which made it entirely less stressful for me!!)

It's a fun experience, isn't it?

oh my!! these are fabulous! i can almost taste them!

I used the yellow cake recipe earlier today - well, it's actually three in the morning, so technically yesterday. Anyway ;D

I'm 18, and my mom is an excellent baker, and when she looked at the apparently unconventional ingredients she discouraged me from making it. But I decided to take a chance even though I didn't have exact measurements for the flour and cornstarch, and I didn't sift either of them on top of that.

I used about .80 cups for the flour and 3 tbs for the cornstarch. The batter turned out fluffy and light, but still seemed cakey enough to not be called a liquid.

They came out well! They tasted a lot less sugary and a lot more fresh than cupcakes from a box (first time making cupcakes from scratch). It was a very subtle baked vanilla flavor, kind of spongy rather than fluffy but not in a bad way. Definitely more subtle than box cupcakes, and a different texture, too.

They weren't quite moist, per se, though maybe my idea of moist is different than most people's. I also didn't use exact measurements or sifting which could contribue to that as well. On the other hand, they weren't dry either. They were light and pleasant and not overpowering.

I would make these again! I mean, I don't have another yellow cake recipe to compare to, but I think this one's pretty good.

I am going to try this recipe for my little sisters college graduation cupcakes. I would love to get your green tea frosting recipe. Any chance you will share it?