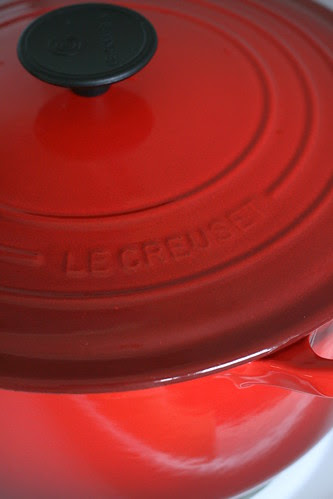 When Steven and I went to the local outlet mall, I never expected to come home with a 13 pound addition to the kitchen. I didn’t even want to go inside the Le Creuset store because it’s just filled with gorgeous things I can't afford. *siiigh* Why bother? But Steven convinced me to take a peek and I’m sure glad he did because there happened to be a sale, a damn good one! The 5 1/2 quart Dutch oven was on sale for $150! Holy crap, what a freakin' steal! You bet I'm gonna get one. There was some inner turmoil about whether to get the original Flame or the sexy Cherry Red. It couldn't have been more perfect timing because the enamel on my Chefmate Dutch oven started chipping off. $40 for a pot that only lasted me 2 years or $150 for a lifetime warranty? 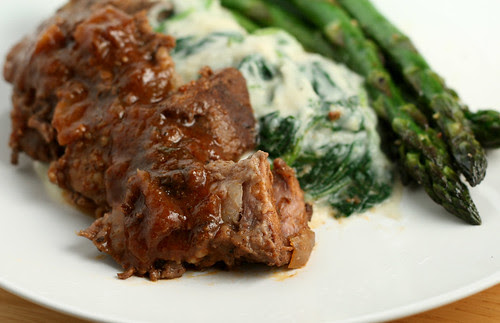 The original plan was to get some lamb shanks or beef short ribs (inspired by Jen’s beautiful recipe) to christen the shiny new pot but neither of them were on sale. Instead, I got a chuck 7 bone roast, which is still pretty tasty. Our last CSA box had a bunch of good stuff, asparagus, sunchokes, and spinach. I roasted the asparagus in the toaster oven and made sunchoke creamed spinach after being inspired by Harold Dieterele’s recipe on Top Chef.

I'll have to try this recipe again with the lamb shanks like I originally planned.

Pour a cup of hot water over the dried porcinis to rehydrate them. When they are soft, use a fork to fish them out of the liquid, saving the liquid, wash them to get rid of excess dirt and grit, and mince. Wet a coffee filter or paper towel and line a fine mesh sieve. Strain the porcini water to get rid of excess dirt. The wet filter will prevent it from absorbing the flavorful porcini liquid.

Tie the herbs in a bundle with some twine so they’re easy to pick out later.

Season the beef with salt and freshly ground black pepper on all sides. In a Dutch oven or large pot, heat a tablespoon of olive oil over medium high heat. Brown the chuck roast (or short ribs, or shanks) until it is browned on all sides. Remove from pan and set aside.

Lower the heat to medium and add the vegetables, some salt, and freshly ground black pepper. Cook until the vegetables are softened and translucent and scrape up any browned bits on the bottom of the pan. Add the porcinis, garlic, and tomato paste and cook until the tomato paste has started to caramelize slightly. Add the porcini water, red wine, and return the beef and any accumulated juices back into the pot. Lower the heat to a bare simmer, cover and let it braise for 2 – 3 hours or until the meat is fall off the bone tender. Add some water if there's not enough liquid in the pot.

When the beef is done braising, remove from the pan and turn the heat up to medium and reduce the sauce by half.

Melt 1 tablespoon of butter in a saucepan over medium heat. Saute the sunchokes until they are light brown on the edges. Add half cup of heavy cream and half cup of water and simmer on very low heat until the sunchokes are tender, about 15 – 20 minutes. Puree the sunchokes in a blender or food processor, add some of the cream they were cooked in to thin the mixture.

In skillet heat 2 tsp of olive oil in a skillet over medium heat and sauté the spinach until it is wilted. Pour out until accumulated juices in the pan and use a spatula and press out as much liquid from the spinach as you can. Fold in the sunchoke puree, lemon zest, juice and season with salt and pepper.

Ooh, what a deal! I got one of my Le Creuset skillets on sale -- I still talk about that one, I was so thrilled!

I'm doing the finally review of the page proofs for Table Manners - your recipe looks wonderful! I'll put a copy of the book in the mail in Sept (I'm traveling July and August), but you can always pop into a bookstore after Aug 4 if you wanted to take a sneak peek!

I am so envious of the new addition to your kitchen. Lucky you! What a fabulous deal you got! The recipes looks fantastic. I think the beef will be next up on my menu.

Such an appropriate and perfect pan for a perfect "Red Wine Braised Beef"
Cheers,
elra

That's an incredible steal! And the food looks delicious!

Well guess what - with Fortune Off closing down in Woodbridge MAll I had a whale of a time picking up kitchen items that were really inexpensive - and now I have a few things to get started on...is nt it th mostest fun to try out your new gadgets .

Your Le Creuset pot was worth it - I have had mine for at least 20 years. Red wine braised beef or beef bourguignonne are two of my favorite dishes.

What a beautiful colour!

Wow! I wish $150 could sound like a steal to me! That still seems way too expensive for my budget. I admit that it is cheaper than it usually is, but still. My cheap, Farberware pot has lasted for more than 5 years so far....so I guess I'm okay haha. Your le cruset looks absolutely beautiful. I'm filled with gentle envy :)