The snow is all fun and games until you realize there's 8 inches of it to shovel out of the driveway. While Steven painstakingly cleared the driveway, I made myself useful by building a snowman. Standing at a majestic 4 foot something tall, he's the greatest snowman I've ever made. 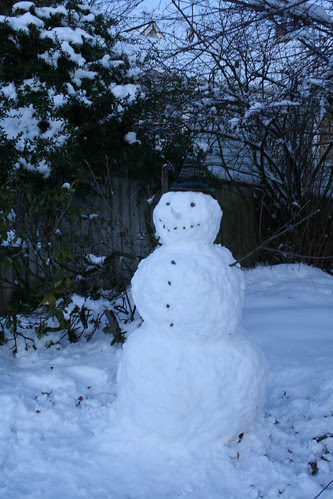 My favorite part is his nose, which is a giant icicle instead of the usual carrot. Gives him the same sort of look, except 10x cooler (wow that was sooo unintended... gotta love crappy cold weather puns).

After the last few days of playing in the snow, I realized I've fallen ridiculously behind on making all of my holiday food items. I was supposed to get my 12 days of cookies done by tomorrow but right now, it's not looking good (6 cookies posted and 2 days to go?). But a friend said Christmas isn't just a day, it's a whole season that goes until January. I guess it's true, it's not like the holiday baking stops after Christmas. In the spirit of holiday baking I'll keep these cookies coming at my unreliable sporadic pace.

I just finished making my last official present last night (which I will post about later because the recipient reads this blog). Now I have a crapton of other things to make for Christmas, that is, if the car can make it out of the driveway. On the list: hot chocolate mix, marshmallows, aebleskiver mix, stollen with candied orange peel and rum raisins (soaking in rum right now), and chocolate chip cookies for the neighbors that lent us their snow shovel.

These oatmeal power bars are supposed to be a homemade imitation of these Costco oatmeal bars that Steven's dad likes so much. Last time I was at their house, I briefly glanced at the mile-long ingredient list for the bars - butter, oil, oats, brown sugar, coconut, nuts, dried fruit, and flax are the few I could remember. I bought a bag of ground flax seed from Trader Joe's for the sole purpose of trying to recreate the bars. Although I knew the majority of the correct ingredients, without the right amounts, I ended up just tossing stuff together. I obviously haven't mastered the skill of remaking food items because my bars were not like the Costco bars, still tasty in their own right, but not the same. Mine were so crumbly, a quarter of the bars disintegrated while I was cutting them and turned into trail mix.

To make them healthier, I could try cutting down on the butter and oil, maybe replacing some of it with applesauce, replace the brown sugar with honey or agave nectar, and up the flax and nuts. 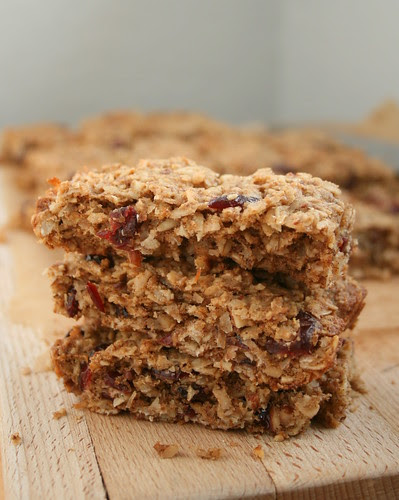 If your almonds and pecans are not toasted, spread them on a baking sheet and toast for 10 - 15 minutes at 350 degrees F, or until the skin has darkened slightly and the nuts smell fragrant. Set aside to cool. After they are cool, chop roughly by hand or pulse them in a food processor.

Pour 1 cup of hot water over the dried cranberries and let them rehydrate for 5 minutes and drain.

Scrape the dough into the lined jelly roll pan and press the dough onto the pan with your fingers. Cover the dough with another piece of parchment and using a small rolling pin or empty wine bottle, roll over the parchment until the dough is evenly packed in the pan. Remove the top piece of parchment. Bake at 350 degrees for 15 - 20 minutes or until the edges are browned, the entire top is golden, and the center of pan is baked. You can use a toothpick to poke the middle to make sure it's not still gooey.

Run a knife along the edge of the pan to loosen the cookie from the pan. When the pan has cooled with room temperature, transfer the entire sheet of cookie to a cutting board (the easiest way to do this is to place the cutting board right next to the pan then use the parchment paper overhang as handles and slide the whole thing onto the board). Cut the sheet in half width-wise, then each half into quarters, and then cut each quarter into 6 bars. You should get 24 bars, give or take a few that will fall apart.

Try golden syrup. That will stick it together nicely :)

They sound delicious! I can't wait to see how you tweak the recipe.

These look perfect for a healthy snack!

Hello, I stumbled on your site thru a google search for the owner of the (late lamented) teahouse in New York called "Leaf Storm". Now I've just spent much too much time reading your archives and cookie recipes.

Your great snowman reminded me of my favorite gift this year, a funny serious book called "A History of the Snowman".

Great ingredients in these power bars! Thanks for this recipe. Happy new year!