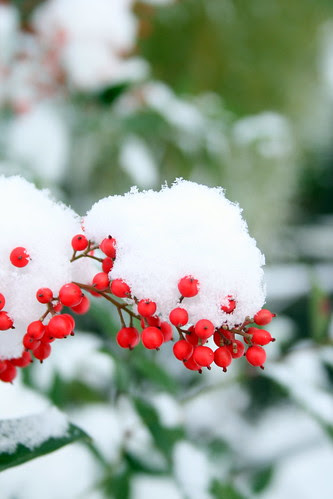 When it snowed last Thursday, Steven thought it was a better idea to stay home instead of going to work. 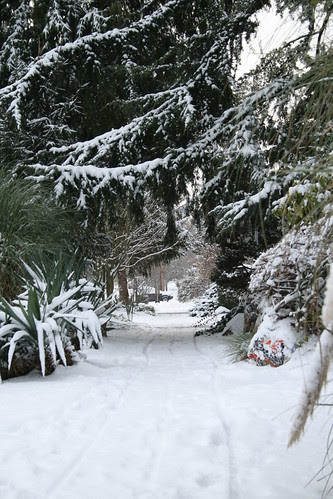 We debated whether to use the trash can lid or CSA box to go sledding down the hill. Eventually, we decided both were a bad idea. Seattle pretty much falls apart when it snows-schools close at the mere prediction of snow, the bus system goes down the pooper, cars start sliding everywhere-it's a mess. Probably because we have insane hills and maybe 1 or 2 snow plows. 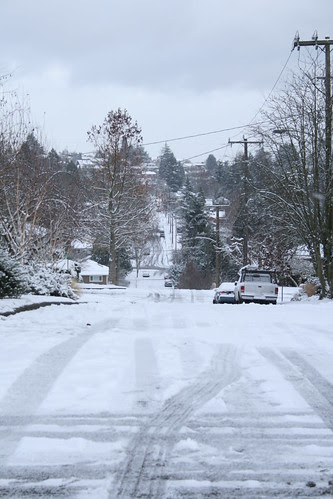 Replace the power lines with ski lifts and you have yourself a nice slope for skiing (except that you can be blindsided by cars coming down the cross streets... that would be a problem). 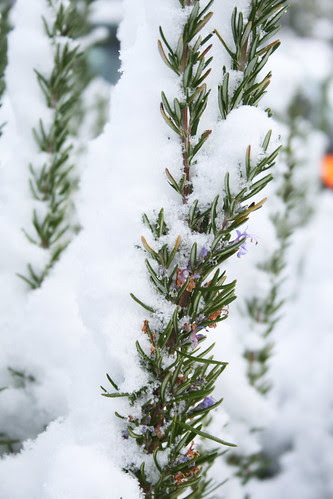 We stopped to smell the rosemary, which grows like crazy around here. Our neighbors have a huuuge bush of it. 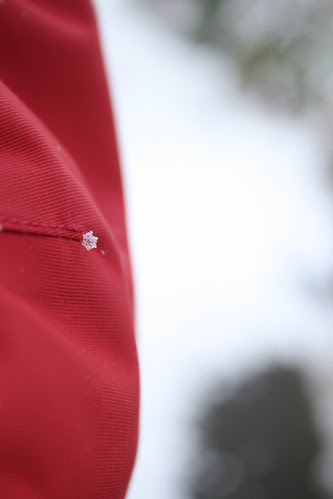 I never realized that snowflakes actually look like... snowflakes! I always thought those 6 pointed paper cutouts you see taped on windows around this time of year were idealized versions of what snowflakes could look like. Snowflakes don't actually look like that right? Kinda like how a heart shape doesn't quite look like a real heart. We usually get the amorphous clumps of snow crystals here so this was the first time I've seen these large, beautiful snowflakes. 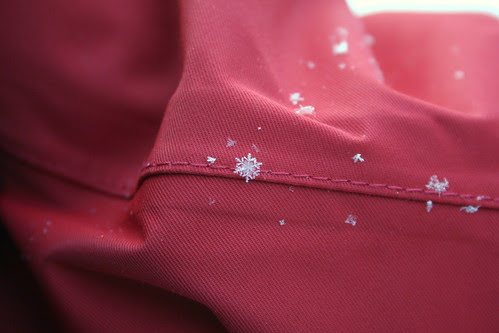 I could have stood there all day taking pictures of the snowflakes that fell on Steven because as cliche as it sounds, each one was unique and absolutely perfect. But eventually I could no longer feel my toes so it was time to go home and have some hot chocolate and biscotti. 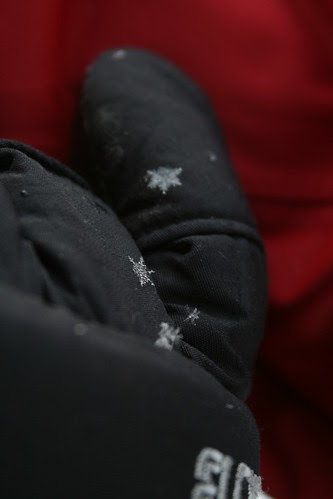 Since my last biscottis turned out so well, I decided to try another biscotti recipe from Dorie's book and as expected, they were just as good. 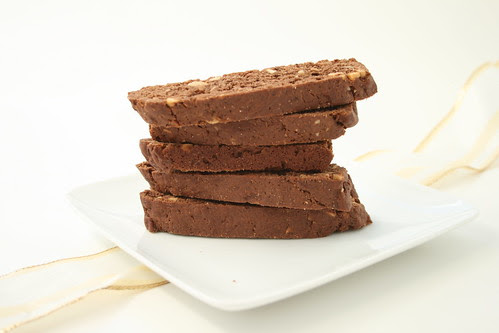 Chocolate and Hazelnut Biscotti
Adapted from Baking by Dorie Greenspan

Preheat the oven to 350 degrees F. Place the hazelnuts in a baking pan and toast for 10 - 15 minutes, or until the nuts are golden and smell fragrant and the skin has darkened and blistered. Pour the nuts onto a towel and wrap them up in the towel so they can steam. After 2ish minutes, rub the nuts together in the towel to remove any loose skins. Transfer the nuts to a bowl and cool completely. Chop them roughly with a knife or pulse them briefly in a food processor.

In a large bowl, whisk together the flour, cocoa, espresso powder, baking powder, and salt.

Line a baking sheet with parchment paper or a silicone baking mat. Scrape half of the batter onto the baking sheet and shape it into a rectangle 3 inches wide, 10ish inches long, and about 3/4 inch tall. Do the same with the remaining batter, spacing the loaves 4 inches apart. Bake at 350 for 20 - 25 minutes, or until the loaves are baked in the middle but still somewhat soft and springy.

Remove the pan from the oven and cool the loaves until they can be handled. Lower the oven temperature to 300 degrees F. Using a sharp knife, slice the loaves on a slight diagonal into roughly 1/2 inch slices (as thick or thin as you want). Stand the sliced biscotti up on the baking sheet like dominos and bake at 300 degrees F for another 20 - 30 minutes, or until they are dry and firm throughout.

Cool to room temperature and store in an airtight container.

I had a book that suggested taking a black velvet fabric out into the falling snow so you could see the individual shapes of the snowflakes. I've never done it (I live in SC, for one reason) but, boy can you imagine seeing those on black? That is absolutely amazing.

Love the biscotti recipe. I have one for Orange Cinnamon that I make each year. It's wonderful. I'll have to try yours.

Gosh, I've heard from my family (and I have heard on the news) about the massive snowfall in Seattle. Stay warm and take care of yourself! I see that you are taking care of Steven with all of those delicious baked cookies!

These looks soo goood!! I cant wait to try making them! Hey, what kind of camera do you use? Your pictures are so sharp! :)

Went sledding with both the trash can lid and the waxed cardboard CSA box. The CSA box was definitely more successful. :)

Anonymous
Thanks for the comments, I use a Canon Rebel XTi.

Amy, I think the better question would be what lens do you use? Those photos are amazing, great job. Our friends in the Seattle area don't seem to be complaining much about having to stay home from work because of the snow! I wish I could be home baking those delish looking biscotti's.

What wonderful shots of the snowflakes! A lot of friends up in Seattle have been taking pictures of things like skiing around Greenlake, but nothing with so much tenderness and detail as the snowflake shots. Thanks for sharing them with someone who is so very far from any snow at all :)

lovely pics. I love snow. Too bad we don't get any of the white stuff here. Altho' shoveling.....

Nice pictures!! haa... btw i hd added your blog-link into my blog n i hope u dun mind :)
http://lovelycraving.blogspot.com/