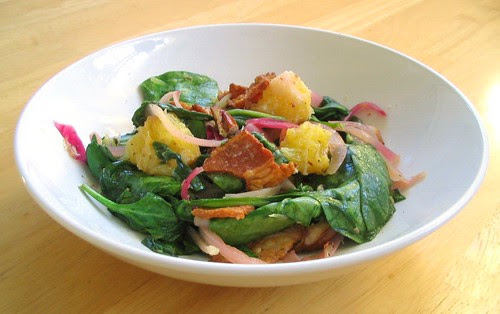 To be honest, a wilted spinach salad doesn't sound all too appetizing. It conjures up the image of limp and lifeless greens smothered by a heavy dressing. But don't be fooled by the name, this is actually my new favorite salad. Baby spinach leaves are quickly tossed to prevent overwilting in a warm dressing. Add in some crisp bacon, orange segments, red onions and top with toasted nuts and egg slices, what's not to like?

Notes:
- After taking the photos , it occurred to me I forgot to add the egg slices! But I had already eaten my salad and it was too late. But the eggs are really a delicious touch so I wouldn't skip them (unless you hate eggs) :).
- The 6 oz. packages of prewashed baby spinach leaves are really convenient for this recipe.
- Only a small amount of bacon fat is used in the recipe to keep the dressing light.

Begin by hard boiling your eggs. Place the eggs in a small saucepan and fill with cold water, covering the eggs with an inch of water. Bring the water to a boil over high heat and once it boils, remove the pan from heat. Let the eggs sit in the pan for 10 minutes. If you like the yolks a little creamier, go for 8 or 9 minutes. Then transfer the eggs to cold water to stop the cooking. Peel the eggs. Cut them in half lengthwise then cut each half lengthwise again into thirds.

Transfer the spinach to a salad bowl and set aside.

Cut your bacon into 3/4 in pieces and fry in a skillet over medium heat to render out the fat. Cook until chewy or crisp depending on your preferences, about 10 - 15 minutes. (I like crisp bacon, Steven likes chewy bacon, but since I cook, crisp usually wins out over chewy.)

Meanwhile, slice your red onion into 1/4 in slices. Cut the onion in half and peel away the skin. Then cut the tip and root end off and slice from pole to pole.

Also cut your orange chunks. First cut the top and bottom of the orange off so you can stand it on the cutting board without it rolling away. Then cut the peel off, by cutting down the side with the curve of the orange. Do this all the way around the orange until you have exposed all of the flesh of the orange and cut away any residual pith. Next cut the orange in half then cut into 3/4 in chunks and set aside in a bowl.

When the bacon is done crisping, transfer to a paper towel lined plate. Keep the pan on medium heat. Pour out all of the bacon fat into a bowl. Then measure out 2 tablespoons of bacon fat and add it back to the pan. Add the onions and cook until it is barely softened, about 1 - 2 minutes. Add the garlic and cook until fragrant, about 30 seconds. Next add the oranges and any orange juice that have accumulated in the bowl and the red wine vinegar. The vinegar smell will be very pungent and strong. Quickly scrape up all the bacony browned bits that are stuck to the pan and add a little freshly ground black pepper. You don't want to cook the dressing, only heat it a bit.

Pour the dressing over the spinach and quickly toss the spinach to evenly distribute the dressing. Add the bacon on top and and divide onto servings plates. Add slices of egg and some toasted almond slices or chopped toasted pecans.

I am with you Amy. Wilted spinach salad is my fav, too!

What a great salad! I absolutely love everything in it, I've never made a wilted salad though... next time I'll try it :)

I'm tagging this recipe right now, Amy - absolutely LOVE all the ingredients you put together here, love eggs in salads!

i love bacon in salad! Making this salad this weekend - i think the kids will love it.