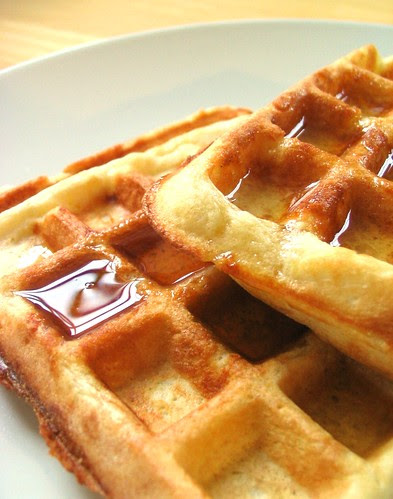 I borrowed a waffle iron from Steven's mom because she never used it... many months ago. I've always wanted to make homemade waffles but they sounded like a hassle since most recipes call for separating one egg and whipping a single egg white. So I kept putting off making waffles for another day and pretty soon, the waffle iron I borrowed from the back of Steven's mom's pantry ended up in the back of my pantry (waffle irons seem to have a tendency to end up back there).

I'm so reliant on my KitchenAid, but it is too big to be effective for one egg white, which ends up swirling around the divot in the bottom of the bowl without getting beaten by the whisk at all. I don't have a hand mixer and I tend to shy away from beating things by hand (what can I say, I'm lazy). But I discovered that beating an egg white is surprisingly easy and quick with a little elbow grease; that is when it's just one, the KitchenAid can beat the dozen if I ever have a hankering for angel food cake. Now that I know how easy waffles are to make, the waffle iron is brought out weekly and is no longer relegated to the back of the pantry. We not only eat them for our weekend breakfast, but I quickly whip some up for an afterwork snack, and the freezer is stocked with a steady supply for a quick breakfast during the week.

These buttermilk waffles are better than anything frozen sold at the grocery store. The outside is so crisp and the inside has that delicious buttermilk tang. The tablespoon of cornmeal is the secret ingredient that really elevates these waffles, adding a subtle crunch to the soft and fluffy interior. 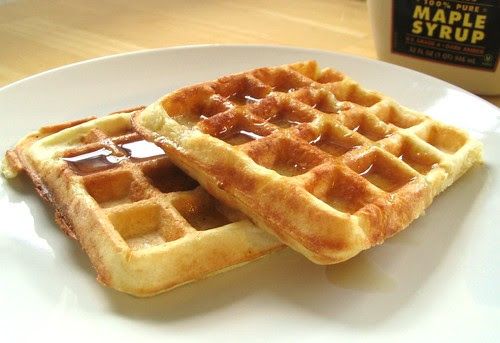 Clean your whisk and beat the egg white to soft peaks.

Fold in the liquid ingredients into the dry ingredients, the batter will be quite thick. Then add the egg whites and gently fold them into the batter.

Spray your waffle iron with some nonstick spray and spread the batter onto the iron. Cook until the waffles are golden brown, about 2 - 5 minutes depending on your machine instructions.

For freezer toaster waffles, leave the waffles golden and slightly underdone. They can be frozen then popped into the toaster for a quick breakfast.

Variations:
Most of the time I prefer my waffles plain with nothing but a generous amount of maple syrup but you can do a variety of things to make them more interesting.
- Dried fruit or fresh fruit: craisins, blueberries, chopped up strawberries, etc.
- Citrus zest: next time I will try adding a little orange zest
- Chocolate chips or butterscotch chips

filed under Breakfast and Brunch

This looks like a lovely recipe that I will have to try. I love the thought of freezing them for a quick snack later, too. Mmm, topped off with our Quebec maple syrup, i know what I am having for breakfast!

Yet another reason for me to consider getting a waffle iron! But I'm afraid that if I do, I'll get addicted to these wonderful waffles....

love buttermilk anything! Specially waffles. I don't have a waffle iron though, maybe I need to borrow one too ;).

Look at all those nooks and crannies to hold all that wonderful maple syrtup!!!These are truly comfort food!!

Mmmmm they looks os yummy. You've reminded me thats its been ages since I last used my waffle iron. I knwo what I'm having for breakfast this weekend.

I still haven't got my waffle iron yet (my BF's mom doesn't have one for me to borrow! ;). Right, I need to start saving up for this!

beautiful! i'm so into buttermilk these days. just made some buttermilk biscuits tonight, in fact. i'll have to use my leftover buttermilk on waffles tomorrow morning!

You know the way to my heart! I loveee waffles! Slap a little syrup and butter (yes, one of the few things I enjoy adding butter to) and it's heaven in breakfast form!

Aimee,
They were just as tasty after a brief toast in the freezer. I love keeping the freezer stocked with them.

Lydia,
Once we started using the waffle iron, we were hooked to these waffles.

Patricia,
Hehehe I'm thinking the same thing. ;D It's been so long I don't think she misses it. Hehehehe.

Veron,
same! I love buttermilk! Maybe someone you know has a waffle iron tucked away somewhere. ;D

Valli,
Oh I agree, I love how they just fill up with syrup!

Anh,
I can't wait until you can make waffles! Yum!

Becky,
Oh I love buttermilk biscuits. Sounds like a good way to use up leftover buttermilk. :)

Hillary,
Steven likes to add butter too but for me it's all about the syrup. Mmmm

I've got to find someone to borrow a waffle iron from!

Ah, so sad, my Hello Kitty waffle iron fell and broke. No more Hello Kitty-faced waffles for me. :(

I think it's time that I made waffles again! These look great! And I'll certainly be drowning mine in maple syrup...

Just the name - "buttermilk waffles" - had me drooling!

Yes, you do have to fight the migratory tendancies of waffle irons. You make beautiful waffles and I love the idea of a bit of cornmeal in the batter. Delicious!

c'mon beating one egg cant be that bad. sometimes i beat 6 by hand. woks very well for your biceps :P
these waffles look divine BTW !
i guess an iron cast makes a big diff.

I love how buttermilk makes everything it touches so tender, and I totally agree on the plain thing - Aerosol cream is great though ,lol.

I made the original recipe in Cook's and doubled it as they suggested. It was terrible due to the baking soda being so bitter. I am glad to see you changed the recipe. They are made better also by an addition of sugar , which also makes them brown nicely. Caroline

Amy, your recipe lives on!
Thanks for sharing this recipe. I make waffles pretty much every weekend for my family, but we were out of baking powder this weekend so I searched for waffle recipes w/out baking powder. Most of the ones that use buttermilk/yogurt and baking soda also call for baking powder, so finding your recipe confirmed my thought that I didn't need baking powder. I doubled your recipe and used 4 egg whites with two egg yolks. The waffles are fluffier and the dog is grateful for the extra egg yolks. :-) My wife really likes the cornmeal.

I put lemon and orange zest in my waffles all the time and it is really good. Combine it with some cloves or a little cardamom, perhaps some cinnamon and vanilla, or even some ginger for more exotic tastes.

For those who don't have a waffle iron, head out to your local thrift/second-hand store. They're usually replete with waffle irons and they usually have the older, cast-iron ones that, IMHO, produce a superior waffle. If you're going to use the cast-iron ones, add a little extra oil to your mix to help prevent sticking.