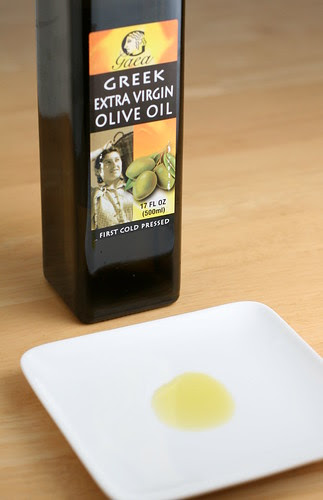 By now, I’m sure everyone has heard that olive oil is good for you so I won't bore you with those details. An "extra virgin" olive oil is the highest quality and means that it has not been chemically treated or heated in the process of extracting the oil from olives. This is the kind you want to look for because it has the highest vitamins and antioxidant content and the most health benefits. "Cold pressed", olive oil obtained without the use of heat, is ideal but the term is unregulated and is used mainly as a marketing tool. "First press" is an obsolete misnomer also used for marketing because there is no second press nowadays. If it says something like pomace-olive oil it means that chemical solvents were used to extract the last bit of oil left in the olive paste (pomace) after extracting the oil mechanically. In Europe, the International Olive Oil Council (IOOC) regulates quality and authenticity of olive oils. However,the US is not part of the IOOC and the USDA has its own murky guidelines but we do have the nonprofit California Olive Oil Council. Their seal guarantees extra virgin olive oils that are mechanically extracted without chemicals or excess heat, less than 0.5% acidity aka free oleic acids (which is a measure of how much the oil has degraded, higher number = bad).

Unfortunately, none of the olive oils I list below are on the list of COOC certified olive oils. I bet the certified olive oils are expensive and possibly harder to find than bigger name brands. Olive oils can get pretty darn pricey. The price per ounce of extra virgin olive oils range from 20 cents up to well over a dollar an ounce.

I compared the Gaea extra virgin olive oil with the oil I currently have in my pantry, Trader Joe's Kalamata extra virgin, a decent oil in my opinion. First, I tasted the oils on its own and then with a small piece of bread. I wasn't hardcore enough to take a sip of oil by itself. The color of an olive oil doesn't correlate with the taste but just for kicks I compared the two side by side and the Gaea oil was slightly greener. The Kalamata oil smelled peppery, whereas the Gaea oil smelled very grassy. The flavor of the Kalamata oil was upfront, one note, and peppery just like it smelled. On the other hand the Gaea oil was milder, took longer to develop in the mouth, and much grassier, and slightly peppery. Of the two, Steven and I both preferred the Gaea but this tasting is far from thorough so take it with a grain of salt. I haven’t compared it with any of the recommended oils listed above, because frankly I don't have the time or money to spend on getting 4 different olive oils. I may switch to the Kirkland signature brand or Whole Foods 365 in the near future and compare with those.

As a side note, I wonder if companies who want food bloggers to review their products should provide some competing products along with their own.

When I buy an olive oil, I look for one that not only tastes good but is also budget friendly, which is why I bought the Trader Joe's kalamata oil. The 17 oz. bottle of the regular, nonorganic, Gaea runs for $10 (59 cents an ounce) and the D.O.P (Protected Designation of Origin) and organic Gaea oils will cost you around $15 (88 cents an ounce). At this point in my life (mired in student loans), I can’t justify spending that much on olive oil. While it’s great that Gaea is a carbon neutral company, it's too bad their olive oils are not the most budget friendly.

If anyone has tried the Gaea oil and would like to weigh in on that oil or offer their opinions about olive oils in general, please leave a comment. I'd love to hear what you think. What's your favorite extra virgin olive oil? 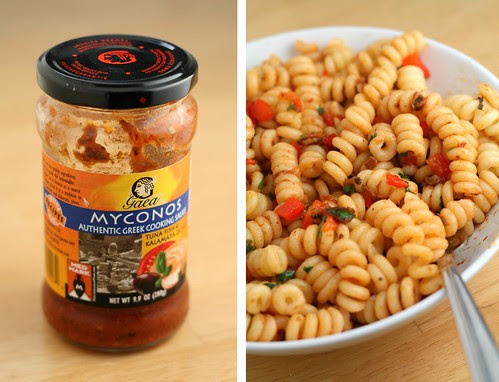 As for the cooking sauce, the tuna and kalamata sauce over pasta tasted like a puttanesca sans capers. It's made with real ingredients (tuna, olives, basil) without any funky flavorings, preservatives, or colorings. But the jar is pretty small so you will probably get one meal for 4 out of it. If you can't get a grapefruit for freshly squeezed juice, use something like Simply Grapefruit with no added sugar. Sweetened grapefruit juice is too sweet in a dressing.

Blend or whisk the juice with the mustard and a pinch of salt and pepper. Slowly drizzle the olive oil and blend until emulsified.

This dressing is great in a salad with fresh dill, grapefruit segments, and toasted almonds.

Thanks for this comparison. It is always 'fun' to try and find a good olive oil.

I bought Savini at World Market and it seems okay so far. Usually buy Carapelli, but it can be expensive.

Nice review. I still have a bottle of olive oil from Greece and one from Italy that my friends brought me from their own respective travels. Oh, to live vicariously :)

Hillary
Chew on That

I've used the Kirkland brand (the one sold in the dark bottle) and it is very good. It has more flavor than any olive oil I've purchased at local grocery stores. I'm interested in trying out the Trader Joes brand though.

I use Costco's Kirkland Extra Virgin Olive Oil (the one in the glass bottle). It usually comes out around Jan/Feb and is only available for a limited time. It is made in Italy (or Greece, not sure) and is wonderful -- green, and very flavorful. Love it over any brand found in the supermarket. The only comparable one I've had was brought to me from Greece by a friend.