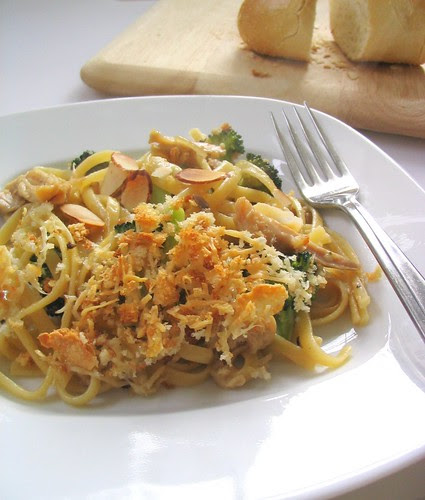 Steven: "Why do you have to call it a casserole? Why can't you call it something else?"

Steven: "I don't know... noodle bake with chicken and mushrooms and... sauce."

Me: "Well it's called Tetrazzini but it's still a casserole."

I made this a few days after I made my green bean casserole to see if I could change Steven's mind about the dreaded "casserole." Of course he remained convinced that casserole is just a code word for bad cooking. Sadly, casseroles have a bad rap, conjuring up the image of overcooked noodles, bland meats, mushy vegetables, and greasy sauces. With proper execution, however, they can be refined and sophisticated, and at the same time homey and comforting - the best of both worlds. Although Steven couldn't escape the fact that this was technically a casserole, he didn't deny that it was darn tasty.

Now fast forward to a few weeks later. As I'm writing this, I turned to him and asked, "Do you like casseroles now?"

Alright! Makin' progress! Next up, cheesy tater tot bake anyone? ;)

Notes
- This is great for leftover roast chicken (like rotisserie chicken) or leftover Thanksgiving turkey
- To avoid the culinary atrocity that is mushy noodle, cook the noodles 2 minutes short of the recommended package time. If they finish cooking before you have finished preparing the sauce, shock them in ice water to stop them from continuing to cook.
- And to prevent the second culinary atrocity that is overcooked vegetables, I add the broccoli florets at the end. I cut them into small bite sized pieces and the residual heat of the sauce and the oven time will be enough to cook them.

Prepare the bread crumbs. Preheat the oven to 350 degrees F.

Pulse the bread a few times in a food proecessor to make fresh bread crumbs. Toss the bread crumbs with a tablespoon of melted butter and spread in a even layer on a baking pan. Bake for 10 - 15 minutes in a 350 degree oven or until they are light golden. Set aside for later.

Preheat the oven to 450 degrees F.

Meanwhile, bring a large pot of water to a boil. Break the pasta in half lengthwise and boil 2 minutes short of the package time for al dente. If your noodles finish before you are done before you finish preparing the sauce, shock them in ice water and set them aside to drain.

In a large saucepan or Dutch oven, melt the remaining 4 Tbsp of butter over medium heat. Add the flour, whisk and cook until the roux is golden and smells nutty. Add the chicken stock in a steady stream while whisking, making sure to get out any lumps. Season with salt and pepper and simmer the mixture until it has thickened, about 5 minutes. Take the pot off heat and whisk in the heavy cream and lemon juice. Add the broccoli florets or frozen peas, the mushroom onion mixture, the Parmesan, and noodles to the mixture, stir to evenly combine.

You can cut the recipe in half or make the full recipe and freeze half (though I have not tried freezing it).

Casseroles do have a bad connotation -- but here you are, freshening them up in such a beautiful way. Perhaps we need a new name!

Looks great- I made Turkey Tetrazzini not too long ago. Nice comfort food dish. I don't call it a casserole unless it actually has casserole in the name of the recipe. I like the addition of almonds in yours.

Amy, no matter how you call this - it looks delish anyway!

I haven't had chicken tetrazzini in a very long time! Yours sounds delicious!

Tetrazzinis remind me of grade school lunches but I like them just the same.

I think you should try and change Steven's mind about Frito pie. ;)

Another tasty looking casserole! I will have to try this.

Lydia,
I think casseroles are definitely making a comeback!

Recipegirl,
Maybe the trick is to not call it a casserole unless you have to. :)

Patricia,
Doesn't matter what it's called as long as it tastes good right?

Deborah,
Thank you! This is actually the first time I've had it myself. :)

Kevin,
Thanks! Let me know how you like it.

Bettina,
Haha yeah, Steven said I should include more dialog in my posts. It was a funny conversation. :D

Gorgeous photo! One of the first things my husband made for me on a date was tater-tot casserole. It cant get much worse than that:)

How well do you think it would work to freeze this for later or would you freeze the cooked turkey? I was just thinking it might be too much food if you are cooking for two starting with leftover turkey.

Sometimes I buy those really large chickens and run out of ideas of things to do with the leftovers (they're really cheap and yield enough meat for many meals!). Thanks for this post, I'll definitely be using it!