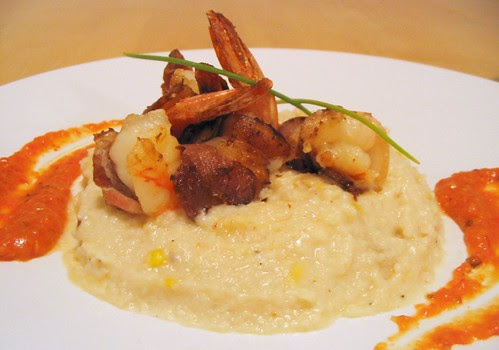 With the holidays coming to an end (I'm so sad... no more listening to Christmas songs 24/7), I finally have some time to tend my blog. I hope everyone had a great Christmas and New Year. Now it's time to write 2008 instead of 2007. I already had to scribble out two checks because I wrote December, then January 2, 2007. I'm sure I'll finally realize it's a new year sometime in March. What better way to start off the New Year than with some cleaning, blog cleaning that is. As I wade through this blog clog of recipes I'm going to attempt to finally clean it up and start the year fresh with no more old recipes! Hooray! After I post these recipes that is. :)

I made this dish a while ago when Steven and I were watching Top Chef Miami. Steven and I are Top Chef junkies you see; we watch the show religiously and have seen every episode, reunion, special, or what have you. If you ask me, nothing can beat the sheer awesomeness of season 1 (I <3 you Lee Ann) but the last season had its moments, especially the hilarity of Joey's numerous failed euphemisms (gray horse? throwing people over the bus?) and Anthony Bourdain's numerous guest appearances. Anthony Bourdain people! Need I say more? Ahh... I digress... Anyways, the biggest disappointment of the show was the elimination of my favorite competitor, Tre. I mean when someone makes a recipe like bacon wrapped shrimp with cheesy grits, how can you not cheer for them.

Season the shrimp with pepper, there should be enough salt from the bacon. Cut the bacon in half and wrap each piece around a shrimp.

Sear the shrimp after the grits and sauce have been prepared.

Sear in a skillet over medium to medium high heat until the bacon is crispy and the shrimp is fully cooked.

Heat an empty skillet over medium high heat. Add the corn kernels, you do not need to add oil. Cook the corn, stirring occasionally until the corn starts to smell toasty and literally pop out of the skillet. Remove to a bowl and set aside.

Bring the chicken stock and milk to a simmer in a saucepan. Whisk in the grits a little at a time. Once all of the grits are incorporated lower the heat and keep warm. During this time you can start the shrimp.

Check the grits to make sure they are not too thick. If they are too thick, add a little milk. Before serving, fold in the shredded cheese and toasted corn.

Note: if you want the sauce to be less spicy, remove the seeds from the chipotle peppers.

Broil the red bell peppers until the skin has bubbled and blackened. Here is how I prepare my peppers for roasting.

When the peppers are cool enough to handle, peel the skin off, chop, and set aside.

Heat a tablespoon of olive oil in a saucepan over medium heat. Saute the onions until they have softened and are translucent. Add the garlic and cook until fragrant, about 30 seconds. Then add the chipotle peppers, adobo sauce, red bell peppers, and chicken stock. Simmer until the peppers have completely softened, about 3 - 5 minutes.

Add the sauce to a blender or food processor and puree until smooth. Whisk in the butter one piece at a time. Then season with salt and pepper and add the lime juice.

What other Top Chef recipes am I pining over? Elia's scallops and Ilan's fideos. Not to mention I'm SO excited for Top Chef Chicago. When will there be Top Chef Seattle?! Cmon Bravo!

Okay, now I have to confess that I'm a Top Chef junkie, too. This cheesy grits recipe was one of the real standouts of last season -- a season which did not showcase much cooking, I'm sad to say. I don't suppose there will be a Top Chef Rhode Island any time soon, though!

This is almost the same recipe that we tried for our Uptown south cooking class. I wonder if the roasted red pepper butter is a classic combination with shrimp and cheesy grits. I must admit though the bacon wrapped shrimp makes this dish top notch!

I'm a Top Chef junkie as well! I remember this, and remember thinking how delicious it sounded! I also have Tiffani's dessert from the holiday special printed out to try.

You can never go wrong with bacon and shrimp!

This looks really good. I too am a Top Chef junkie. Though the commericalization of it is getting to be a bit much.

Girl, all you had to say was "bacon and white cheddar"! It looks scrumptious! I bet it tasted even better...everything tastes good with bacon!
Happy New Year Amy!

Believe it or not, most Canadians don't eat grits; it's not a common staple here. Cornmeal incorporated into recipes, yes, but not grits. And when we hear that everything in the Southern States is served "with grits," it doesn't sound very appetizing. However, this recipe with its accompanying photograph has changed my perception of grits. It looks and sounds delicious. I'll have to give it a try.

Lydia,
Top Chef is so much better than the shows on Food Network. :) This season was still very fun to watch, they had some fun challenges. :) I'd love to see a NE based Top Chef.

Veron,
I actually swapped out the tomato butter from the original recipe for roasted red pepper butter because I didn't have any tomatoes. :) Bacon wrapped anything is a winner in my book. :)

Deborah,
Oh my gosh I really want to make that too. I'll have to look on the website for the recipe.

Sig,
Thank you! Hope you had a lovely holiday!

Helen,
Everything does taste better with bacon! :)

Yukonchatterbug,
Grits is definitely a southern thing, though it is very similiar to polenta. But do give it a try, especially with white cheddar, it's just so creamy and delicious.

Thanks for calling out the Bacon God's for me! http://carolinadreamz.blogspot.com/2008/02/crazy-for-chipotle.html